How to simply create the Mandelbrot set on the Commodore 64 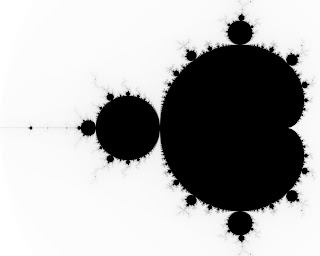 When I was a kid, I loved my Commodore 64 computer. Back then, I had a subscription to Compute! magazine, which listed out programs that I typed into my Commodore 64. I typed in dozens of these programs, and it usually took four evenings after school for me to type one program into the computer, and another day to debug my mistakes. The games and programs really weren't really much fun, so I only ended up playing the games for about a few hours. I spent way more time typing programs into the computer than I ever spent playing the games on the computer.

In the April 1987 Compute magazine, there was a program called Hyperscan, which rendered a picture called the Mandelbrot set. I was completely fascinated by this picture and design, because the Hyperscan program allowed me to zoom in to the Mandelbrot picture and explore the seemingly limitless detail of this image. I spend weeks with this program, and I printed out tons of different parts of the Mandelbrot set on my dot matrix printer.

I never understood what the Mandelbrot set actually was until recently, when I decided to research it. I knew that it was a very detailed picture that was created by a relatively simple formula, but the programming of Hyperscan was really complicated, so I could never figure out exactly what that supposedly simple formula was. I also knew that the Mandelbrot set uses complex numbers, which are numbers that have the square root of negative 1, or i.

A complex number is a number like .5+1.1i. The thing that makes this number complex is that part of it is an imaginary number, or i. i is the square root of negative 1, so you could write this complex number as .5+1.1*sqrt(-1).

The square root of negative 1 really doesn't exist, so that's why we just write i, instead. Even though i doesn't exist, then i times i, or i squared does exist, and it's just -1.

To graph complex numbers, you use the real part of the number as the x axis, or the horizontal axis, and you use the imaginary part of the number as the y axis, or the vertical axis. The number of .5+1.1i would correspond to the point (.5,1.1) on a regular x,y graph. On these Mandelbrot pictures, this point corresponds to the lower right corner of the graph, as the y axis is usually reversed, but since the set is a mirror image, this doesn't matter.

The upper left point of these Mandelbrot pictures is -2-1.1i, which using graphing coordinates is (-2,-1.1).

Now that we have the background in complex numbers, the Mandelbrot formula is relatively easy. It takes a complex number, which we call Z0 and we iterate it using this formula:

If computers had complex data types, then the computer code for the Mandelbrot set would be pretty simple.

But, the problem with this psuedo-code is that most programming languages don't have a data type of Complex. So, we have to do the calculations that I wrote above, in a spelled out way. The good news is that this only adds a few lines of code, so it's still a pretty simple formula.

While recently researching the Mandelbrot set, I became fascinated with the lack of simple instructions that there are out there, on how to calculate this relatively simple formula. I also got really nostalgic for my old Commodore 64, so I decided to combine both. I found a really cool Commodore 64 emulator, VICE, and I relearned Commodore 64 BASIC in the quest to write some simple code that would explain the Mandelbrot set.

I present below some of the simplest Mandelbrot programs ever. The low resolution program is very low res, and produces an image that is only 40x25. The hires, or high resolution image is only 320x200. By today's standards, it would never be considered high resolution, but this does use the maximum pixels on the Commodore 64's display. I made both programs as similar as possible, so you can easily dissect and change them if you'd like. 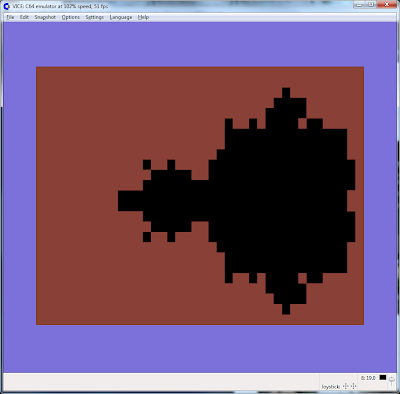 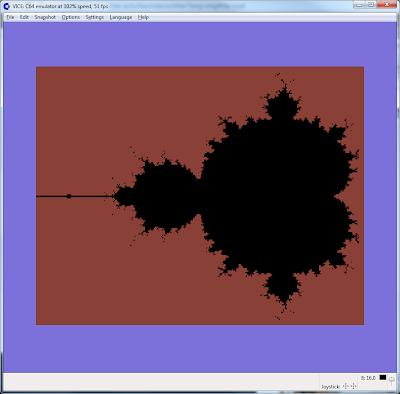 
About the pretty colors you see on other Mandelbrot images:
To keep this simple, I used only two colors, black, and non-black. The most common way of doing colors is to record how many iterations before a number fails the Mandelbrot test, and map various colors to the numbers of iterations before failing the test. A common number of iterations is 255, because that usually maps well to color formulas.